“We live, each of us, to preserve our fragment, in a state of perpetual regret and longing for a place we only know existed because we remember a keyhole, a tile, the way the threshold was worn under an open door.” from Great House by Nicole Krauss
It is the small objects; the ones that look so ordinary but hold the secrets of all that make us human.  The most striking realization I had of this was the first time I walked through the Holocaust Museum in Washington, D.C. It was impossible to walk around without a weight on my heart, reading about the beasts humans can be to one another.  Most overbearing for me, though, was the small display of personal effects, collected from victims in the camps: hairbrushes, razors, the small kinds of objects that have no meaning, really, in the context of their daily use. But when considered in light of loss, these tiny items haunted me with the humanity that was denied to their owners, so much so that I had no other option but to retreat to the dark, concrete room where you hear stories of survivors piped in through speakers and let the darkness settle.
This narrator is an antiques dealer, specializing in objects seized by the Nazis.  He searches all over the world to find the objects that hold the weight in the world within them for some.  I love how Krauss’ characters often have a respect for the small details of life that speak volumes of who we are as a people. The fate of this dealer, though, is wrapped in the inability to put the pieces of his broken life back together again–the impossibility to curate a moment that has passed, and he is left standing the burden of unbearable longing, which I think is humanity’s signature.
Leave a reply 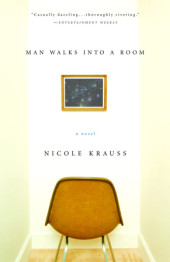 I recently finished Man Walks into a Room by Nicole Krauss. It was a highly anticipated read, as not only was it very critically acclaimed, but she also wrote one of my favorite books I’ve ever read, The History of Love. Last year I read a lot of books about memory: The Inheritance of Loss, The Mysterious Flame of Queen Loana, and The Memory Keeper’s Daughter. This topic is one that never fails to interest me: perhaps because I fear losing the moments of my past that have shaped and influenced me, perhaps because I fear that the places which in a sense define me are slipping further away into the past tense: rather than my drives through fields and the smell of evening air in Ohio, it is becoming the energy of the city and the smell of Brooklyn sidewalks in the summer.

But last weekend I was out on Long Island, visiting the beach on an unbeachy day, and all that is in me that longs for space and tea and quiet swelled up again. So my memories of those places aren’t gone, but just dormant. I think? I’m not sure I could survive in the city without remembering country roads and open skies and the hope that I will get to visit them. (Ironically, I’m not sure if I would survive in the suburbs anymore, either…rural, though, perhaps? A character in the book said that she couldn’t go back to the suburbs of Cleveland anymore, not in the same way (page 55). That is how life feels…though I guess that happens with time alone, and not just space.) It’s not just outdoor space, either. This has been a year of friends moving and things changing and me realizing the impact of having those people and friendships gone from my immediate life. I can deal with the loss ok (sort of!), because I can remember.

Before I turn into a ridiculously cheesy song lyric, let me explain the literary connection. Samson, the main character in Krauss’ book loses all of his memory except up until the age of 12. The book examines not only this theme, but of scientific intervention with memory. But what stuck with me the most was the quote: “I know, I know. A little to the left or right and I might not have remembered how to go to the bathroom. I might have existed in some eternal moment, with no memory of the minute that just passed. I might have lost my ability to feel. I’m lucky, sure. What I lost is, in the grand scope of things, almost…negligible .” (page 44)

I’m just not sure that his loss is negligible. His organs and senses are intact, but his entire framework for seeing and dealing with the world is gone. Interestingly enough, he has his memories from childhood–but they end at age 12–about the age of my students. And though they have had life experience, they don’t necessarily process through it meaningfully until much later, through the lens of even more life experience. The scientist who works with Samson brings up the idea that memories are a burden to keep (page 89). This is partially true: I am haunted quite often by memories and they can affect an afternoon or more of my life…but they are also a grounding, I think.

There is so much more thinking that needs to be done about this book, but the simplified bottom line is that this book made me very sad. Near the end, Samson describes his state: “He’d surrendered his past for a plot of emptiness.” (page 213)

Maybe my reaction is part of the reason why I am such an incessant reflector in life; I just really believe that there is meaning to be made. 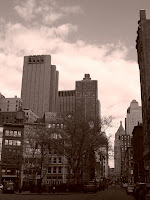 And yet. These two words might be my new favorites. They are often on the lips of my new favorite fictional grandpa, Leopold Gursky in Nicole Krauss’ “The History of Love.” We meet him in present day New York City without family, many friends or really much to look forward to. He is at once waiting for and painfully scared of death. During his youth in Poland he wished to be a writer–before the war pushed him to America, where he became a locksmith. He tells his story of lost love with poignant detail and unlocks the poetics of human longing. “And yet.” is the most often repeated sentence…well, no grammarian could call it sentence. And yet. They are the Leopold’s most profound words. A string of hope is woven through the lonely events of his life and I love him for that.

The word yet is kind of funny. One of those that if you repeat it over and over again it loses all meaning, which happened to me as I was thinking of what to type. The OED lists it as meaning “nevertheless; in spite of that.” I love the idea that hope can still come, nevertheless: in the throes of loneliness and desperation, or quiet, or anger. It kind of makes me want to write my own poetry of “and yets.”

the city is concrete
and yet
glazed by light

Those words change everything, and become strikingly poetic when the second half conveys a different kind of beauty or scent of humanity. and yet. It makes me think.

crowded
and yet
desolate

I found another place:

“dying, and yet we live on; beaten, and yet not killed; sorrowful, yet always rejoicing; poor, yet making many rich; having nothing, and yet possessing everything.” 2 Corinthians 6:9-10

let’s be and yet kinds of people.