Tree of Codes by Jonathan Safran Foer was on my radar for a long time.  It was published in late 2010, but I knew that I wanted to read it with other people because it’s die-cut structure, taken from Bruno Schultz’s The Street of Crocodiles, is so unique (see picture.  He removed text and his story is what remains).  What he has left his readers with is like a heightened, poetic literary experience that feels almost universal because they barely know the narrator.  Its publishing house, Visual Editions, says that “books should be as visually interesting as the stories they tell.” Luckily I have some kindred readers in my life, so we finally got to it after purchasing it at least six months ago.   We had our book discussion last week and realized that we wanted to nerd out, reread it, and reconvene in August for further conversation.   This interview from the New York Times further explains how this book is unique. 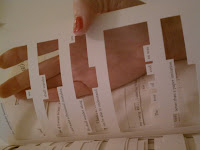 One of the most significant parts of our conversation came from looking at the book as a whole and the gaps in between the words: that perhaps they were a metaphor for what we know of people’s stories.  If we only get a small part of the text, what do we do with that information? Do we try to fill in the gaps? Accept that they are there? It made us think about whether we can we ever know the entire story of anything be it a historical event, a person’s life, or anything in between.

What pulled this together, though, was a statement in the middle of the story: “We find ourselves in the tree of codes.”  I am still thinking through what the “tree of codes” actually is, but I keep connecting it to the narrative of life: that there are stories and moments that we are left to interpret and seek out some kind of meaning.  A few pages later it says, “the last secret of the tree of codes is that nothing can ever reach a definite conclusion.”  This, of course, reminded me of reading–how one can read between the lines and take things away from the story, but how in art, and in turn life, interpretations may vary.

The biggest question from the text came on the third page from the end: “what was there to save us?” Having read The Street of Crocodiles after I initially read Tree of Codes, I know the deeper story of the original narrative; that there was a named conflict and that this question was practical.  In Foer’s version, when the conflict and story is more general and open, the question feels even more weighty.  It leads me to think about the different things that people need to be saved from in this life.  It makes me think about hope.  It makes me think about what matters and where beauty and truth and words fall into the picture. It also conjures up feelings of sadness that can surround beauty, as well, and nostalgia, and the wondering if it will all ever fit together.

So, if you want to, find a copy of this book.  It will take you no longer than an hour to read and will provide you with seemingly endless fodder for mid summer thinking if you have been left in a haze of humidity and discussions revolving solely around the weather.  I’ll be back with some continued thoughts in August.