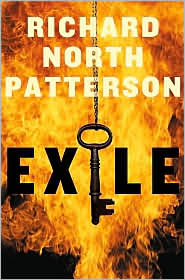 I recently finished Exile by Richard North Patterson which at first glance looks like a the pulpy mystery novel that it is, whose intent is to have its reader driven by the plot alone to race through its 750 pages. However, its research based subject matter, the conflict between the Israelis and Palestinians, was both insightful and thought provoking.

A culturally Jewish lawyer, David Wolfe, is about to enter a career in politics and is engaged to a woman, daughter of a holocaust survivor, highly connected to the Israeli population in the United States and overseas. However, when the Israeli Prime Minister is assasinated in San Francisco, he is asked to defend Hana Arif, the Palestinian woman he was involved with 13 years prior, as she is the main suspect in the killing. What follows is the unravelling of not only who was behind the assassination, but a close look at the Israeli-Palestine conflict.

There are two main things I walked away thinking about: the ways that one culture shapes our thinking and concerns and the question of how we are ever going to be able to overcome our prejudices and hatred.

One question I often think about is how are we meant to live? Much of American culture is defined by the value of personal freedom and individualism. It becomes very easy to have a lackadaisical attitude toward life and to be consumed by details that are often meaningless in comparison to those in other nations. How are we meant to live? I can’t believe that being naive to the world’s issues is the way. I think it’s important to be thankful for the certain freedoms that we have here, but at the same time to notice its own frailties and shortcomings…the obsession with having more stuff, or forgetting what community means or thinking that everyone else covets what we have.

Those who have grown up amidst war and violence obviously have a completely different perspective; one that I will never be able to truly understand and can only enter into through books and art.

So I suppose that I can try to answer to two questions I raised the same way: we must live by knowing one another’s stories and therefore fostering an understanding and sharing in one another’s pain and by doing so, slowly letting go of the hatred and prejudice that poisons humanity.

I’ve been trying to plan this post for weeks…but I always seem to lack the words to do so. The complexity of life makes it nearly impossible to name an answer or to attempt to really understand. And then my white, educated, American background sometimes leaves me feeling not privileged but naive. I would like to have hope that we as people can humble ourselves and not live out of pride and fear, but out of love and grace. But sometimes that seems like an impossible task. Perhaps we are all permanently exiled from our true Home in this life. Things are not as they should be and I just don’t know how to handle it.

One thought on “Exile.”