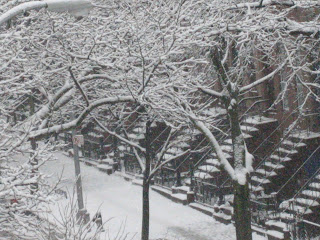 First, Saturday morning rituals on Wednesday? Sigh. Snow days are the greatest. My tea and I are currently sitting next to our bay windows watching snow fall over Brooklyn with The National and Bon Iver and Fleet Foxes. Love.  Last night after Lost with some Upper West Side favorites, I walked down Central Park West to 59th Street, feeling no need to get home quickly. The city was so still and the cold was…perfect? (That combination of words rarely comes out of my mouth.) The no wind, refreshing, snow-is-coming kind of cold? I love this city.

Books that overlap stories and history are some of my favorites. The historical settings in The Lacuna by Barbara Kingsolver were almost more interesting to me than some of the characters themselves.  The main character floated literally and mentally/emotionally between Mexico and the U.S. between the late 1920s and 1950s.  In Mexico, he worked for Diego Rivera, Frida Kahlo and Leon Trotsky.  While in the U.S. his past of consorting with socialists and communists got him into trouble, despite his very private, quiet life in Asheville.  There were two descriptions that stuck with me well after reading:
One, he describes the post World War Two U.S. as “the land of weightless people” who have shed history and their pasts (400) and Americans as people who want to forget all that was painful and trade it in for what was shiny, new and forward reaching.  The psychology of this is understandable, but ultimately pretty unhealthy.
Mexico was different to Harrison.  Upon visiting ancient ruins he said, “It was Mexico. Or rather, Mexico is still what this once was.” (493) It seemed to him that Mexicans carried past conquests, losses and beauty with them into the present.
My question is to what degree are we our own ruins and pasts?  For some, ruins define them: it is  too much to bear, but nonetheless tucked away, carried in pockets each morning and a reminder when grabbing one’s wallet or spare change.  For others, the ruins define them for a spell and are irrevocably changed, but the inciting incident can barely be made out in the far reaches of their minds.  And there are those who continually look forward, able to walk away without looking back.
I think. I think that the ruins make us, but I hope they aren’t the only thing that defines us (because there is that word, hope). When Harrison describes Americans as weightless, I don’t think that it is a compliment: more of an eerie observation of a people who want only to avoid the painful, confusing or complex, ignoring the realities in front of them.  Ruins can be beautiful and haunting, leaving both scars and inspiration.
Regardless, one of the most thought provoking quotations from the book seems to be a good way to end: “whatever I came here looking for is hiding, holding its breath,” (394).  As we are walking, trying to make sense of it all, we must just keep looking, and in turn become weightier people.
Leave a reply